CAPRE MEDIA | CAPRE EVENTS > Conference Coverage > Data Centers > Up Close with Microsoft and Equinix in Seattle: What Enterprises are Asking for and the Evolving Trends in the Data Center Market

Up Close with Microsoft and Equinix in Seattle: What Enterprises are Asking for and the Evolving Trends in the Data Center Market 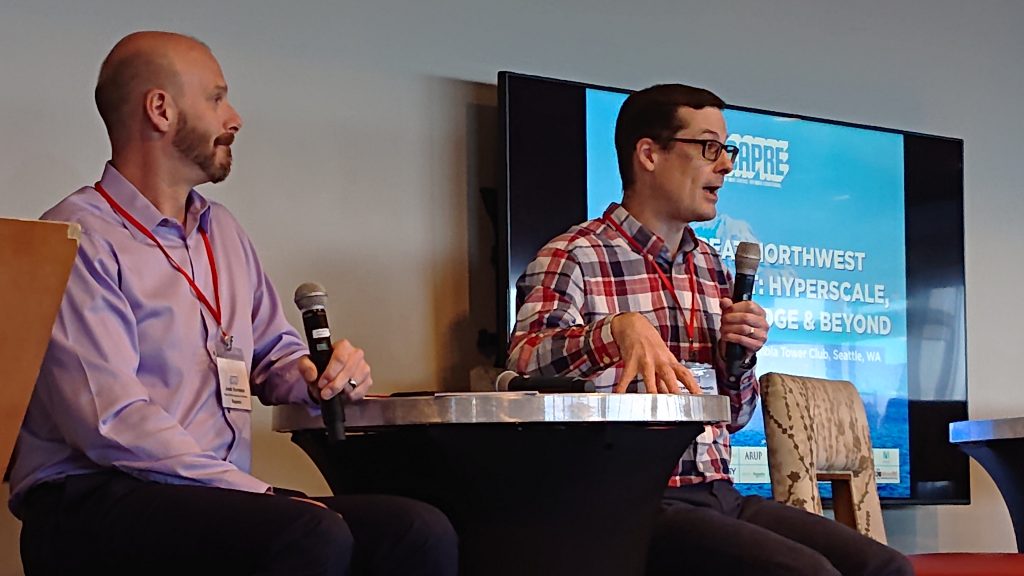 SEATTLE, WA – “Up Close with Microsoft and Equinix: What Enterprises are Asking for and the Evolving Trends in the Data Center Market” with Josh Sordelet, Senior Global Solutions Architect at Equinix & Bryan Woodworth, Solutions Professional – Global Black Belt Cloud Infrastructure at Microsoft was a central highlight of CAPRE’s Great Northwest Cloud Summit in Seattle on November 21.

Not surprisingly, the conversation kicked off with an organic topic – the nature of the partnership between Microsoft & Equinix, exemplified by Microsoft Azure ExpressRoute, which is an Azure service that lets enterprise create private connections between Microsoft data centers and infrastructure that’s on still on-premise or in a colocation facility.

“We’re seeing a tremendous increase in connectivity and bandwidth and it’s happening in surprising places,” remarked Sordelet, who shared some insight from the Equinix Interconnect Index, which delivers insights that drive digital business advantage by tracking, measuring and forecasting growth in interconnection bandwidth. “The number one driver of interconnection consumption is manufacturing. I never would have expected manufacturing to be the sector to drive that. But it’s because they’re realizing the power of the Azure platform as they apply it to more and more of their workloads. So I think we’re going to see more of these non-traditional technology companies begin to embrace these strategies.”

Woodworth then concurred with Soredelet, pointing out that there have been some surprising outcomes to these trends that the Cloud could never have expected. “One of them has to do with private paths,” he listed, before then explaining that private paths are part and parcel of what he calls new hybrid. According to Woodworth, new hybrid is comprised of four key vectors – innovation, speed, consistency, and security. Furthermore, new technologies and strategies to address and leverage these vectors are critical to the future of our industry.

“Finding these secure paths where we can reduce vectors of exposure, as opposed to increasing them, is highly desirable,” added Sordelet. “And what we’re seeing is that as Clouds like Azure continue to expand their footprint and reach further toward the end user, you’re able to bring some of those tools close to the end-user at the Edge, so that you’re able to build these more kinds of apps.”

Woodworth then mentioned how major cloud providers are just figuring out that enterprise wants paths. “They want the agility of managed services and the innovation that brings, but they don’t want to give up the network-centric security model, for better or worse,” he asserted. “Because it’s too hard to recertify their compliance eco-system around these applications.”

“They’ve gone through a tremendous amount of trouble and expense to certify critical applications against a lot of industry standards. Ripping the infrastructure and security stack out…and having to rebuild with different tools and concepts reduces agility. It can take years and months to do that. Enterprises need the goodness of paths, but that wrapper of private connectivity and network capability,” continued Woodworth.

“Data proximity is the key to performance,” added Sordelet. “Having that data close to those paths endpoints and close to those compute resources is the key bridge that enables enterprise to bring that historical data with them and do new things with it.” Sordelet then shared a story of a major energy provider he has worked with, that is afraid of migrating data because of security. However thanks to the latest and greatest tech mentioned above, that concern could be waylaid.

About three quarters of the way through the discussion, a member of the audience asked the two panelists to opine on how we might expect to get this same level of security and availability at the Edge. “What if I’m not in a data center? What if I’m not in Equinix?” he asked. “What if I’m all over the place?”

“Well there are a number of strategies for bringing those edges into a centralized region,” replied Sordelet. “We see a lot of SD-WAN deployments looking to try to enable and secure those types of solutions. We’re looking at how some people bring their larger centers of gravity toward that common hub through Layer II technologies, whether it’s private line or ethernet 2 private line or DWDM dark fiber. It really depends on how deep their pockets are and what latency metric they’re after. We’re seeing a move away from IPsec VPN over the internet, and away from MPLS, because it’s high cost for on-going maintenance. People can get better performance for lower cost from either SD-WAN or Layer II types of technologies. Those afford you greater security paradigms.”