DALLAS, TX – Hybrid IT is all the rage. But it’s far from a homogeneous trend. That’s why panels about enterprise end-users are a staple at CapRE’s Data Center Summits. And these discussions are never quite the same as before, since this topic is so dynamic. CapRE’s Dallas Data Center Summit in August was no different, and that’s why we invited Emil Sayegh, CEO of Hostway Services, Inc to present an opening keynote presentation, titled The Future of Data Centers: How the Cloud Providers are Playing with Traditional Data Centers. And Sayegh had quite a bit to say about the direction – and reality – of the Cloud.

And according to Sayegh, the bottom line is that the Cloud, with all of its hype, will never replace other models of compute, such as colocation or managed hosting. However, it’s vitally important to understand what goes where.

“Then if you go to colocation, this is when a customer says, okay, look, this stuff is movable. I can run it on standard gear. I can run it away from my facility,” he continued “And colocation is a great way to host some of these applications with things like OSS, workflow, ERP and other customer software apps.” 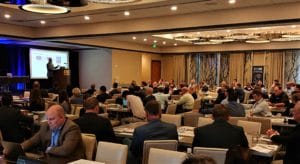 What About Packaged Apps?

According to Sayegh, more “packaged apps” are probably much better suited to a managed hosting provider, such as one that has expertise in Microsoft technology, analytics technologies, or VMware. “This is the more, kind of, standardized applications in which they can provide expertise,” he explained “Oracle and so on and so forth.”

“But it’s your problem,” stressed Sayegh, concluding this portion of his remarks. “You have to think about it. You’re the general contractor at that point, and you have to think about all of these issues. And the trends are going away from you owning all of the assets, to the CFOs are putting more and more pressure on going to an OpEx model, and away from a CapEx model.”

For more coverage of this presentation, check out previous CapRE Insider Reports: