“If You Help People, They Will Come” | Tim Kiser Reflects on 17 Years in the Data Center Industry at CAPRE’s Atlanta Data Center Summit

ATLANTA, GA – CAPRE’s Fourth Annual Greater Atlanta Data Center Summit cast a wide net to cover all of the latest deals and development in the Peach State, and one of the most highly anticipated panels of the day dove deep into one such transaction. “Greater Atlanta Acquisition of the Year: A Fireside Chat with American Tower and Colo Atl” featured John Ghirardelli, Director – U.S. Innovation, American Tower and Timothy Kiser, current Owner of Kiser Consulting and former owner of Colo Atl, which he sold to American Tower earlier this year. Early in the discussion, moderator Brian Klebash, CAPRE’s Founder & CEO, asked Kiser to reflect on the lessons he has learned in his 17 years in the Atlanta data center industry. 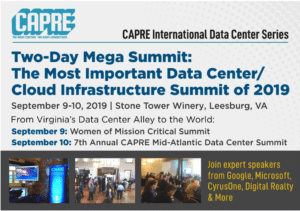 “There are a lot of memories and accolades,” began Kiser. “What I can tell you is that I’ve never treated anyone in this room as a competitor. I’ve always treated them as another business partner or associate. A lot of the time, you can really excel in your business when you partner with other people who also do what you do. A lot of the ladies and gentlemen in the room are from the telecom business, and it’s a small group. You’ve always been kind of familiar with everybody in the group. But it’s now starting to grow some.”

Kiser then shared his sincerely held belief that if you treat people right, they’ll do you right. “I started my company with this and have been trying to pass it onto American Tower, since they’re new in the business,” he recalled. “I want to teach them anything and everything I know. The engineering piece is easy. People skills is what I’m trying to impress. Be good to people. Don’t over-promise. If you say you’re going to do something, do it.”

“I love to say how we’ve never had an outage ever, for almost 18 years now,” he beamed. “That’s important – people want the power on. They put heat in the room, we take it out.”

Next, Klebash asked a follow-up question. “What was the most significant sea change over these 17 years?” he posed to Kiser. “Was there a period you witnessed change more rapidly?”

“Whenever you have a Presidential election, things seem to slow down. But all you can do is just persevere,” replied Kiser. “You just keep putting out the message. Some people can accelerate in those environments, while others can’t. We’ve had ups and downs in our economy. The last two years weren’t so great. And now it’s allegedly great – I think if the news people say it’s great, it’s great. And if they say it’s bad, it’s bad. Everyone believes them. Through all of the up and down cycles, and John [Ghirardelli] can attest to this, we made 15%-20% [growth] every single year. Regardless of the economy, regardless of the election, or who was in power at that time.

“I started my company because I wanted to help people. That never changed over seventeen years, regardless of what was going on in the economy,” Kiser concluded. “Helping people was the great thing. If you tell them you’ll help them, then they’ll come.”