Data Centers Will Get Bigger & Better, But Flexibility Will Be King | Insights and Outlook from Data Foundry’s CTO, Ed Henigin

AUSTIN, TX — From being one of the first ISPs in the United States to its global expansion, Data Foundry continues to expand geographies as well as service offerings. The first day of CAPRE’s Texas Data Center Summit, held at Data Foundry’s Texas II facility, was a Keynote by their own CTO, Edward Henigin. “Insights and Outlook from a CTO” featured observations and perspective from Henigin’s long tenure at Data Foundry, where he was actually the first employee.

“We started as a consumer-oriented ISP, and when the first web browsers were hitting, when Netscape came out, we could see there was going to be some momentum,” he recalled, providing an overview of Data Foundry’s genesis to kick off the session. “We grew really well in those early years, starting in San Antonio, and then expanding to Dallas, Houston & Austin.”

However, it wasn’t long before Data Foundry switched their focus to data centers – which wasn’t a big stretch for them. “Our whole reason for being is to connect people,” he explained. “That was the philosophy we took to designing and operating data centers. Every data center that we build and operate is carrier-neutral. Every carrier needs to be here and every customer needs to have access to every carrier. And while you’re here, we want to over-deliver. We’ll tell you that we’re the best and we’ll show you that we’re even better. That’s just who we are.”

According to Henigin, that philosophy pays off in many ways. “The snowball effect that you get from carriers coming in and making massive investments and providing massive amounts of data and capacity for highly inexpensive rates was the cornerstone for a long-term colocation strategy,” he shared. “So we wanted to get big property here to convince the carriers that if they’re going to make the investment to build in here, that investment is going to pay off over a long time…they’re going to make a whole lot of money as they leverage it to many clients.”

After sharing these opening remarks, Henigin then provided a look into the overall vision for Data Foundry when it comes to IT infrastructure. “They key things we care about are power density and network density. That drives how many cables we have to have in the cabinets and how much cooling capacity we have to have per square foot on the floor,” he shared, before also divulging that while he takes all forecasts from industry experts about massive increases in power density with a grain of salt, he has worked with more than one client with significant requirements.

“There is a trend for higher power density and higher cabling complexity and those are things that we do support, moving forward,” he stressed. “We do plan, design, and operate in a way that will support that.”

Next, Henigin moved onto a perennial topic – the Cloud. “The cloud is doing a lot of replace a lot of IT infrastructure for a lot of firms. If you look at it on an aggregate basis, the colocation business is growing. Every colo market that I’m aware of is growing. Some of them are growing faster than others, but none of them are shrinking. And I mean, when was the last time you deleted a photo? You don’t really delete things anymore.”

And not surprisingly, according to Henigin, that shift has an impact on what happens with IT infrastructure. “A lot of that storage and processing is going to the Cloud in different ways, but I don’t know that it’s Cloud at the expense of colo. They’re really both growing together,” he asserted. “A lot of our clients have jumped in with both feet and really embraced the Cloud and all that it has to offer…but then they often find out that it’s quite a bit more expensive than you think, and then eventually have to pull back some of their operations out of the Cloud.”

“A data center is a lot like an airport. An airport has its own operations staff, its open metrics for how it operates,” Henigin then illustrated. “But the airport is pointless without the airlines. Those airlines, those carriers, are really the true customers of the airport. So we’re in a similar situation where we have our facilities, we have our operations and all of the things that we do, but we do it because of the customers that use the facilities.”

“Like the airport, where the carriers don’t matter if they don’t have their own customers, our customers here are here for a reason. They’re here to serve their customers. We’re very sensitive to our place in that stack. If we’re not enabling our customers to do what they need to do to serve their own customers, then we’re not doing it right,” he continued, sharing that Data Foundry has taken on more and more of the operational aspects of compute and storage, so that their clients can focus on what they do best. 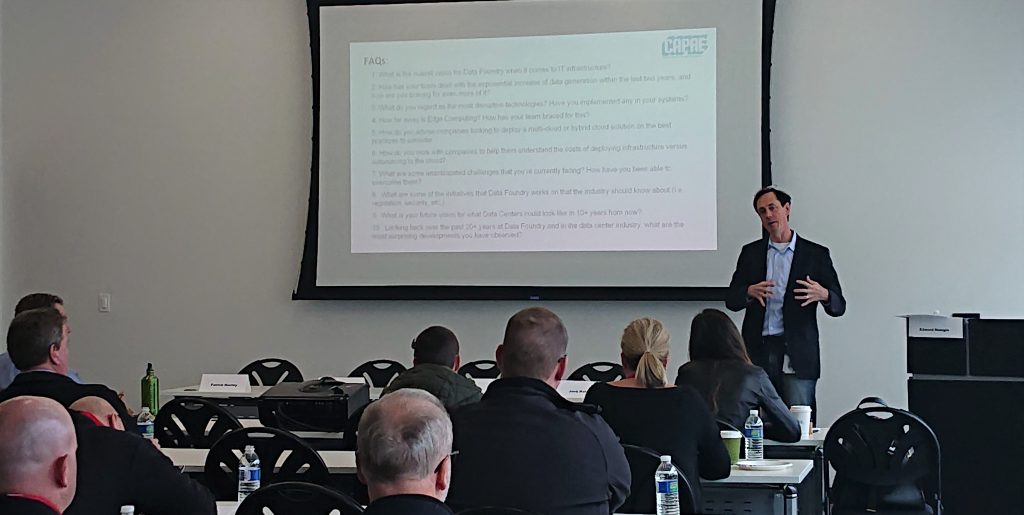 As the opening keynote inched toward its conclusion, a member of the audience then rose their hand to ask a question – is Data Foundry building as quickly as it was a few years ago? “We are growing as fast as we were a few years ago,” answered Henigin. “One of the things we are very cognizant of is that the majority of enterprises in the United States still run the majority of their IR on their own properties. So there is still a huge untapped market of “server-hosting” that is yet to be outsourced. We’re still seeing it trickle out.”

Furthermore, the market is maturing as it grows as well. “We’re seeing smarter RFPs, which tells me the market is maturing,” divulged Henigin. “When you look at then, they actually make sense. It’s not the first time they’ve thought about it. Things are getting better. Again, Cloud and colo are growing in concert with each other.”

Then, another attendee asked Henigin a question – specifically, for his thoughts about modular data centers — why they haven’t quite taken off in the way that other industry leaders predicted they would, and why Data Foundry hasn’t jumped on that boat.

“Every business today utterly, critically relies on data,” replied Henigin. “When your email isn’t working, or you ERP stops flowing, or your accounting system stops working, your business can grind to a halt. Imagine a hospital. So when people make decisions about where to put their IT, one of the most important factors to consider is trust. It’s impossible to fully vet any solution or fully predict the future, so critical to making your decision is whether you trust people. And we’re able to win that trust with our customers by showing them who we are and what they do.” This differs significantly, Henigin explained, from how a pre-fab data center designer might lay down a one-size-fits-all solution.

The final question – and topic of discussion – then had to do with Henigin’s vision of the future of data center design. “The Trend with data centers has basically just been…bigger. We started off using 400 KW UPS modules, then 675, and now we’re using 1.5 MW. These bigger building blocks are much more effective. The first data hall that we built was at 10,000 square feet. The most recent one we did was about 30,000 square feet. A lot of the things we do are to drive costs down, drive lead-times down, and increase flexibility for whatever comes in the door. Big spaces, lots of cooling, lots of power mean that we can handle anything from small to large and anything mixed in in-between.”

“Would I extrapolate to the future?” he asked the room, before making some predictions. “Yes I would. I think the long-term [trend] for data centers will be bigger, more dense, more packed in, combined with more value. As people get more comfortable, you won’t need all of the bells and whistles to be amazing. I think people will be more comfortable with a mid-tier kind of product. Pricing and availability should get better and better for customers as time goes on.