Check out the latest in deals, development and disruptive technology in the data center space for Aug 2, 2019: 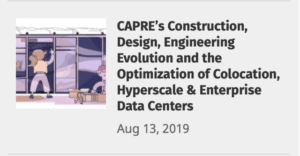