Buckle Up: First Come the Cables, then Comes the Carriers, then the Asian Content Providers

LOS ANGELES, CA – Southern California is not the easiest data center market to break into. However it has a lot of draws to push past the barriers – with perhaps the most important aspect being its connectivity. And that’s why CapRE’s Seventh Annual Southwest Data Center Summit: The Telecom Evolution featured a panel all about those connections — Connectivity in Southwest Markets: Analysis of New Subsea Landings, Latency Challenges and Innovations in Fiber.

“Well, there is the Hong Kong to America cable, which is connecting Hermosa Beach to Hong Kong and branching out to Manchester California and to Taiwan,” replied Nagpal. “And then there’s the Pacific Light Cable Network (PLCN), that’s connecting to Hong Kong and has two branches, to the Philippines and to Taiwan. And then there’s the Jupiter cable which is from Hermosa Beach to Japan and the branching unit to the Philippines. And the Curie cable, which is owned by Google, from Los Angeles to Chile. Those are the projects underway.” 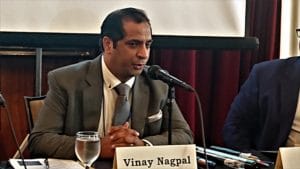 “So obviously, One Wilshire is the Center of connectivity in Los Angeles,” remarked Williams. “How do you see this additional fiber changing the market and networks in the next two to three years?”

At that point, Nagpal’s co-panelist Mark McCants, Senior Consultant at The Anatara Group chimed in. “I can talk to that a little bit. My most recent company was Zayo Group. And I ran the Zcolo colocation business here in the Southwest,” he offered. “And we’re seeing a lot of demand from the Asian carriers. And a lot of them are listed on here as part-owners of the cables. So you have carriers coming from Asia that want to be here. And they’re going to start bringing Asian content providers to us.”

For more coverage of this panel, check out an earlier CapRE Insider Report: